These three artists were selected from ten Finalists named from the over 400 applicants to the 97th ANNUAL International Competition. The esteemed jurors were Dr. Makeda Best and Curlee Raven Holton. The exhibitions were organized by independent curator Liz K. Sheehan and Executive Director Elizabeth Spungen.

Many commonalities emerged among the winners of this year’s solo shows. Cheryl Mukherji, María Verónica San Martín and Idalia Vasquez-Achury are all women born outside the United States who came here to further their artistic education and remained to pursue their careers. Beyond that shared circumstance, viewers will discover threads that relate to the artists’ varied identities as mothers, daughters and immigrants; the lasting effects of political and familial trauma; the meaning and weight of inheritance; the intersections of performance and photography; and the complicated relationship between truth and memory. 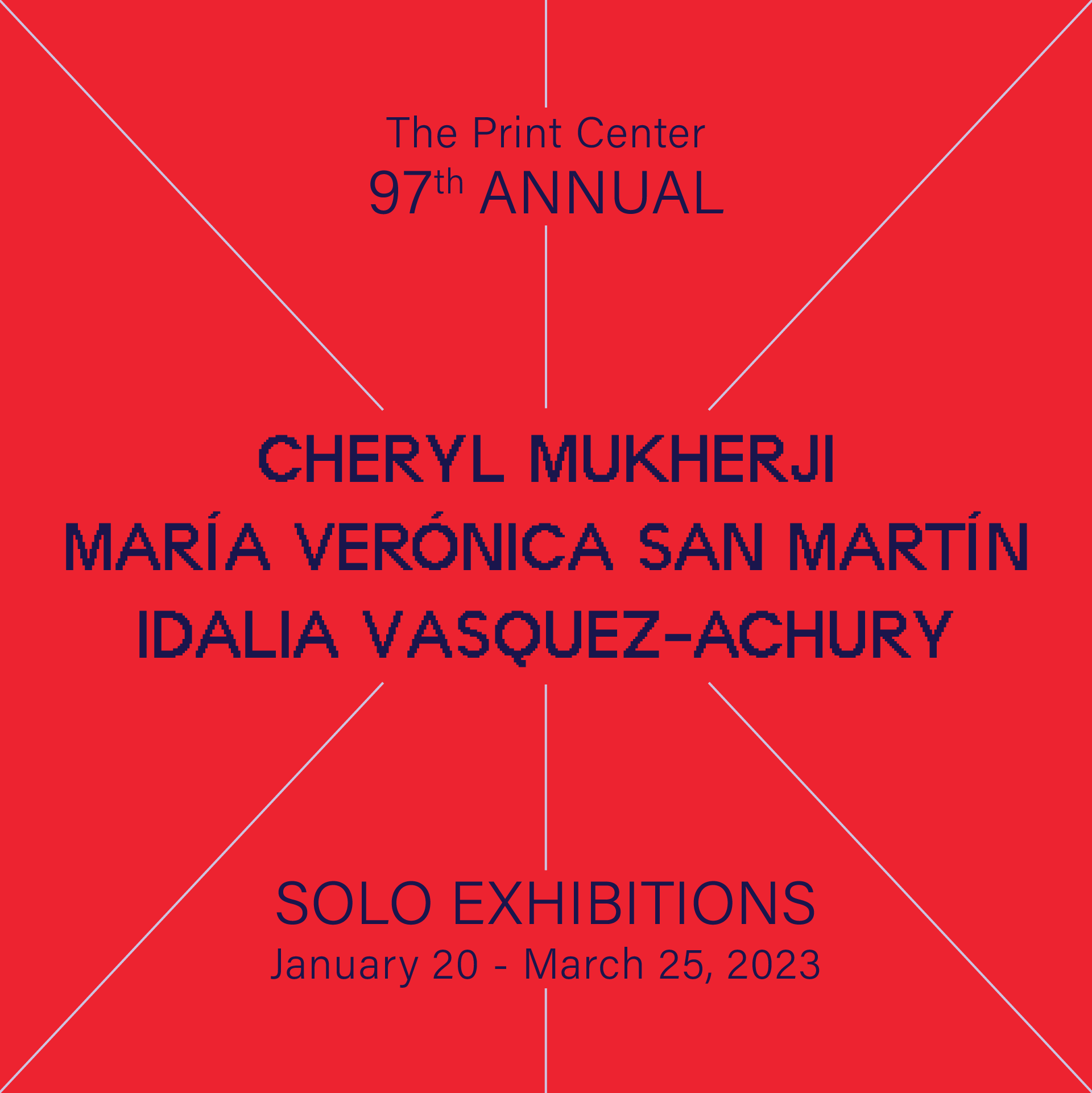 All of The Print Center’s exhibitions and programs are free and open to the public.

Thursday, February 2, 6pm
At The Print Center and on Zoom

Wednesday, March 1, 6pm
At The Print Center and on Zoom

Thursday, March 23, 6pm
At The Print Center and on Zoom

The events surrounding Cheryl Mukherji’s move from India to the United States in 2018, and the separation from her family since then, are the main subjects of her series “Ghorer Bairer Aalo” (The Light Outside Home). In layered and complex images, Mukherji confronts the painful moments typically omitted from family albums to create a counter-archive that examines her relationship with her mother in the context of cultural and familial tradition, likeness and inheritance.

Mukherji uses her family photographs as source material to play with connection and separation through revealing contrasts and similarities between her life and her mother’s. In her words, her work is “an exploration of my origin and inheritance embedded in the figure of my mother. It deals with memory, mental illness, transgenerational trauma, personal and collective South Asian histories, and how they inform my identity as an immigrant in the United States…. In my work, I recall when my mother self-harmed in front of me on my last day at home before moving to New York. Through an uncanny juxtaposition of photographs from my mother’s life and my own personal writing, my work brings forth the complications of a mother-daughter relationship, meditating on domestic labor – not as in washing dishes, but in the work it takes to stay related to someone, even your own mother.”

Cheryl Mukherji (b. 1995, India) is a visual artist and writer based in Brooklyn, NY. She has an MFA in Advanced Photographic Studies from ICP-Bard College, New York. Her work has been exhibited at venues including the Brooklyn Museum; Baxter St. at Camera Club of New York (CCNY), International Center of Photography and the Museum of the Moving Image, Queens, all NY; Minnesota Museum of American Art, St. Paul; the National Portrait Gallery, Smithsonian Institution, Washington, DC; as well as the Capture Photography Festival, Vancouver, Canada; Serendipity Arts Festival, Goa, India; Format Photo Festival, Derby, UK; and Huxley-Parlour Gallery, London, UK, among others. Mukherji was a finalist in the 2022 Outwin Boochever Portrait Competition, National Portrait Gallery, Smithsonian Institution. She has had residencies at the Center for Photography at Woodstock and Baxter Street at CCNY, where she had her debut solo show, Wanted Beautiful Home Loving Girl, in 2022. Previously, Mukherji received Brooklyn Museum’s #Your2020Portrait Award; Capture Photography Festival’s 2020 Writing Prize; a Firecracker Photography Grant in 2020; a South Asian Arts Resiliency Fund grant; and was a finalist for the 2020 Dorothea Lange-Paul Taylor Prize.

María Verónica San Martín engages with the complicated political history of her native Chile through printmaking, installation and performance, with handmade artist books at the center of her practice. She believes that art has a civic, historic and political responsibility to reconstruct the stories of the past in order to create social change. Acknowledging the form of the book as a repository of both memory and knowledge, her work challenges systems of power while proposing a way to learn and heal in the context of past trauma.

Many of San Martín’s books contain text and images derived from government and press archives that expose the human rights violations committed during the 1973-1990 regime of Chilean dictator Augusto Pinochet. Her ongoing series “Moving Memorials,” begun in 2012, consists of thirteen editioned books printed and bound by the artist to honor the tens of thousands of murdered citizens and the thousands still missing. San Martín describes cutting woodblocks as “carving into history,” and observes that while making an etching, “an image that disappears in the printmaking process then reappears printed on paper, like the search for truth and reparation.” She activates her books and engages audiences through performances that transform the intimate act of reading into a public conversation rooted in visual poetry, using choreography that positions reading as a physical act of protest and remembrance.

The relationship between the body, the work and the landscape is an important element of San Martín’s practice. For this exhibition, she designed a labyrinthine table to display her books in a sculptural topography that surrounds the viewer. The title Geology of Memory can refer to this immersive installation; to the Chilean landscape in which so many citizens are buried or lost; or to the layers of history and rhetoric that threaten the truth.

María Verónica San Martín (b. 1981; Chile) is a New York-based multidisciplinary artist and educator. She has an MA from The Corcoran School of Art and Design, George Washington University, Washington, DC. She has exhibited nationally and internationally including at BRIC Arts Media, Brooklyn; Artists Space; New York Immigrant Artist Biennial; Queens Museum; and Rockefeller Center, all NY; and the Chilean National Archive, Santiago and Museum Meermanno, The Hague, Netherlands. Her work is held in more than 60 collections including the Walker Art Center, Minneapolis, MN; The Metropolitan Museum of Art, NY; Museum of Memory and Human Rights, Santiago; and the Centre Pompidou, Paris, France. San Martín was a fellow at the Whitney Museum’s Independent Study Program; a scholar at the Center for Book Arts, New York; an artist-in-residence at Art Omi, Ghent and Interlude, Hudson, both NY; and has been awarded two New York Foundation for the Arts and three Chilean National Grants. Since 2016, San Martín has been performing and talking about her projects “Moving Memorial,” “Dignidad” and “The Javelin Project” in museums, public spaces and cultural centers. She recently performed at the Lincoln Center, New York; had her fifth solo show in Chile at Galeria NAC; and launched “Collective Roadmap,” a project based on the Chilean constitution. She is currently working on a commission for the National Museum of Women in the Arts, Washington, DC, while preparing a solo exhibition for Trinity College, CT and group exhibitions that will commemorate the 50th anniversary of the Chilean coup. San Martín teaches at the Center for Book Arts, NY; Penland School of Craft, NC; Miami University, Oxford, OH; and Booklyn Inc, NY, where she is also a board member.

Idalia Vasquez-Achury has titled her exhibition the Mind of Winter after the essay “Reflections on Exile” by the postcolonial theorist Edward Said, in which he considers how immigrant artists might use the feeling of dislocation to their advantage. Said proposes that the lived experience of more than one culture creates a plurality of vision and a clarity of perspective that he terms a “mind of winter,” quoting poet Wallace Stevens. Using both digital and film cameras, Vasquez-Achury blends fact and fiction in her work with a mix of street and documentary photography, performance and installation, creating metaphors for the complex experiences of immigrants and mothers.

The centerpiece of the exhibition is the handmade book, Marisma, the Spanish word for estuary – a turbulent and transitional marine environment that nevertheless supports some of the most diverse and productive ecosystems in the world. For Vasquez-Achury, this ecological metaphor helps to convey her experience as a Colombian-born woman, mother and artist living in Philadelphia. She describes this project as existing in the liminal spaces between cultures and nationalities, and between physical locations and imagined or represented spaces, where she has built a sense of place, home and identity.

Idalia Vasquez-Achury (b. Colombia) is a Philadelphia-based photographer and educator. She has a BFA in photography from the College for Creative Studies, Detroit, MI; an MFA in photography from the Tyler School of Art and Architecture, Temple University, Philadelphia, PA; and studied graphic design in Bogotá, Colombia. She has exhibited at venues including the Scarab Club Gallery, Detroit and 555 Gallery, Dearborn, both MI; Photo Place Gallery, Middlebury, VT; and Goldilocks Gallery and Woodmere Art Museum, both Philadelphia; as well as Casa SinFin, Bogotá. Her works have been featured in Lenscratch and Don’t Take Pictures, among other publications. Vasquez-Achury has taught at the Tyler School of Art and Architecture and the Pennsylvania College of Art and Design, Lancaster; and worked in advertising in Bogotá and Quito, Ecuador.

All images provided courtesy of the Artists